These are skin cancers that arise from the cells that form the main structural part of the outer layer of skin, the epidermis. There are three main varieties of SCC including Bowen's Disease, which is an SCC confined to the outer layer of skin (epidermis); invasive SCC where the skin cancer includes the epidermis and has penetrated into the dermis and is at risk of spread to other parts of the body; and a Keratoacanthoma, which appear much like an invasive SCC, however they have low potential for spreading to other parts of the body. The main cause of SCC is thought to be chronic UV exposure, either from the sun or from solariums, and there are also causal associations with the wart virus (Human Papilloma Virus), chemicals such as arsenic, and minor trauma such as a bump to the skin. SCC accounts for approximately 25% of skin cancers, with more than 100,000 cases diagnosed in Australia each year. They are more common the closer you live to the equator. The vast majority of SCC can be cured with surgical treatment, however, occasionally this type of skin cancer can spread to the lymph glands as well as more distant sites in the body. This type of spread, known as metastasis, is more likely to occur when the skin cancer has been present for a long time (>12 months) and is a large size (>10mm).

Who is at risk?

People with fair skin, particularly those that get sunburnt easily and spend a lot of time outdoors without sun protection are particularly prone to this type of skin cancer. They occur less commonly in people with olive and darker complexions. Because UV damage to the skin is cumulative, outdoor workers and those who spend a lot of leisure time outdoors are at high risk of SCC - which is why it is necessary to always remember to wear sun protective clothing and protect the skin from the sun when outdoors. People who develop a lot of actinic keratoses (sunspots) and have a lot of sun damaged skin are prone to the development of SCC. Whilst SCC can arise in people under the age of 50, it is much more common over that age. People who are immunosuppressed, such as those who take anti-rejection medications following an organ transplant, are particularly prone to SCC's and other skin cancers. Interestingly, SCC seems to be more common in smokers than non-smokers, and in people whose diet is high in saturated fats. 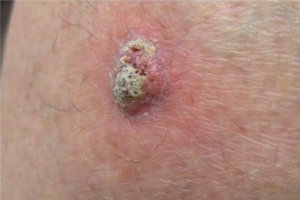 SCC most commonly arises from a pre-existing actinic keratosis, which are generally slightly rough scaling  skin spots a few millimetres in size. Typically SCC is noticed as a fairly rapidly growing type of skin cancer over a period of weeks to a few months, often on the face, bald scalp, or hands, and may be noticed as a tender, slightly raised scaling lump with a pink base, that looks somewhat like a wart. If you notice a new spot that looks like a hard wart then it may be an SCC and you should consult your doctor. A small skin biopsy may be required to confirm the diagnosis. If an SCC is detected then a suitable management plan can be tailored according to the location and subtype. Bowen's disease is typically a slowly growing, slightly tender when rubbed, pink, scaling spot a few millimeters to a few centimeters diameter. Keratoacanthomas arise over a few weeks, are raised pink dome shaped lesions with a hard central core, approximately 5 to 20mm diameter, and are a little tender when touched.

Fortunately the vast majority of SCC’s are able to be completely cured, usually with surgical removal. If the lesion is superficial and confined to the outer layer of skin only, which is known as SCC in-situ (or Bowen’s disease) then topical creams can be used.  Treatment options are most simple when SCC is detected in its earliest stage of growth. Occasionally SCC is found to be a more aggressive variant, or may not be able to be completely excised, and these patients are referred for radiotherapy. If the SCC has spread to the lymph glands or to other parts of the body, then treatment often involves the combination of surgery, radiotherapy and chemotherapy.

Sometimes, despite the previous removal of an SCC, the lesion recurs. For this reason it is wise to have your wound assessed a few months after your procedure, as well as on a regular basis, as advised by your doctor.

People who have had a previous SCC are at increased risk of getting new SCC’s and other skin cancers. For this reason, a regular complete skin examination by your doctor is advisable, as well as regular self skin examination. In addition, strict adherence to adequate sun protection measures should be adopted.