These are skin cancers that arise from the cells in the skin known as melanocytes that produce pigment for the outer layer of skin, the epidermis. The main cause is thought to be UV exposure, both cumulative as well as intense bursts which are associated with sunburn, either from the sun or from solariums. Melanoma accounts for less than 4% of skin cancers, yet is responsible for over 80% of deaths due to skin cancer. There are approximately 12,000 new cases diagnosed in Australia each year. They are more common the closer you live to the equator. Unfortunately this type of skin cancer has a high risk of spreading to lymph glands as well as other body sites known as metastasis. Whilst many melanomas can be cured if detected and treated early, if melanoma spreads from its first site on the skin then treatment becomes more complex and the disease can continue and be fatal.

Who is at risk?

People with fair skin, particularly those with a lot of moles and those that get sunburnt easily and spend a lot of time outdoors without sun protection are particularly prone to this type of skin cancer. They occur less commonly in people with darker complexions. Outdoor workers and those who spend a lot of leisure time outdoors are at higher risk of melanoma - which is why it is necessary to always remember to wear sun protective clothing and protect the skin from the sun when outdoors. People who develop a lot of sun damaged skin, or who have had a previous skin cancer, or a family history of melanoma, are more prone to the development of melanoma. People who are immunosuppressed, such as those who take anti-rejection medications following an organ transplant, are prone to Melanoma and other skin cancers. Whilst melanoma can arise in people under the age of 40, including people in their 20’s and 30’s, it is much more common with increasing age.

Melanoma sometimes arises from a pre-existing mole, and may be noticed as a slowly expanding or changing mole usually over a period of months. It may be any change in the shape, size, thickness or colour. At other times, and more frequently, it is noticed as a new mole, often with an odd shape and more than one colour, which may continue to enlarge and change. Usually there are no physical symptoms, but occasionally they may itch, bleed orulcerate. Sometimes they may grow rapidly, over a period of weeks, and these are usually noticed as red, brown or black lumps that are firm. Melanoma can arise anywhere on the body, including sites that do not get very much sun exposure such as the soles of the feet or the buttocks. For this reason it is wise to perform a thorough and complete self examination of your skin on a regular basis, perhaps every few months – often a partner or family member can check areas that are difficult to see, such as your back, otherwise a combination of two mirrors can be used.

The ABCDE rule is a useful method to remember what to look for in a lesion:

Doctors detect melanomas using a hand held device that magnifies the mole and enables visualisation of the architecture of the mole. This device, known as a dermoscope, when used by someone with a trained eye, is able to more accurately detect melanoma, particularly early ones. Doctors use the ABCDE system for evaluating a mole (Asymmetry, Border irregularity, Colour variation, Diameter over 5mm, Evolution). Occasionally a doctor may recommend monitoring of a mole that has some unusual features but not enough to diagnose melanoma. These moles are monitored using the technique of Digital Photographic Monitoring, and if the mole is found to change after a period of time, usually 3 months, then that mole should be subjected to a diagnostic biopsy. 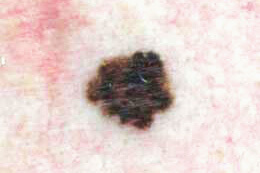 People with lots of moles, particularly ones that are a little odd in size, shape and colour, may be advised to undergo total body photography, so that it is easier to detect a changing mole or a new mole. These people have what is known as Atypical Mole Syndrome (or Dysplastic Naevus Syndrome) and are identified as being of higher risk for melanoma than someone with only a few moles.

Early detection and treatment is an important factor in melanoma survival. The majority of thin, early melanomas are able to be treated with surgical removal and the long term outlook is good. If the lesion is superficial and confined to the outer layer of skin only, which is known as Melanoma in-situ (or Lentigo Maligna, or Hutchinson’s Freckle) then surgical treatment is often curative. If the Melanoma has spread to the lymph glands or to other parts of the body, then treatment often involves the combination of surgery, radiotherapy and chemotherapy and this is conducted at specialised multidisciplinary units such as the Sydney Melanoma Unit. Over the past two decades the long term outcome for melanoma that has metastasised has improved, yet each year around 1200 people will die of metastatic melanoma in Australia.

Usually melanoma will be diagnosed by your doctor through the surgical removal of a mole, and the depth and subtype of the melanoma will then guide your doctor to what further investigations and treatments are required. This may range from a wider excision of skin around the site where the melanoma was – this is done as a way of reducing the risk of recurrence and to be more confident that the entire melanoma has been removed. In other cases, particularly for deeper melanomas, you will be referred to a specialist melanoma surgeon for consideration of investigations to determine whether the melanoma has spread to distant sites such as lymph nodes or other organs. This doctor will then arrange further treatments including any further surgery, radiotherapy and chemotherapy.

Sometimes, despite previous removal of a melanoma, the lesion recurs, either near the original site, or at a distant site. For this reason it is wise to have your wound assessed a few months after your procedure, as well as on a regular basis, as advised by your doctor. Your doctor will also check for signs or symptoms that the melanoma may have spread to other parts of the body, such as the lymph nodes, the brain, the lungs, or other sites.

People who have had a previous melanoma are at increased risk of getting new melanomas and other skin cancers. For this reason, a regular complete skin examination by your doctor is advisable, as well as regular self skin examination.  In addition, strict adherence to adequate sun protection measures should be adopted.